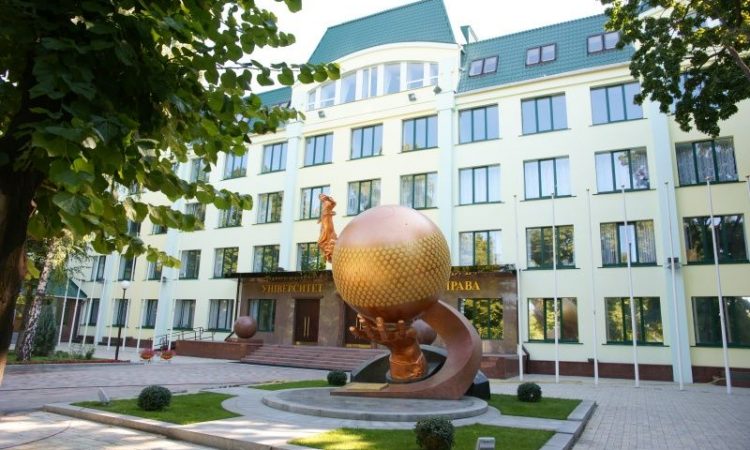 Since 2010, Alfred Nobel University offers a new program in “International Management” validated by the University of Wales, United Kingdom.  The training in the program is conducted entirely in English and satisfies high European standards.

Alfred Nobel University has a team of highly qualified teachers.  The academic staff consists of 97 people with Ph.D. degrees, among these people 17 are Full Professors and 80 people are Associate Professors.

Especially, we are proud for the atmosphere of partnership and goodwill established between professors and students at Alfred Nobel University.

1993 , July – the constituent assembly of the founders of Dnepropetrovsk Academy of Management, Business and Law.

1993 , September – beginning of classes and the course of the first intake of students in the room DAMBL Mounting college in vul.Stolyarova).

1994 , June – and a license from the Ministry of Education of Ukraine for training specialists in “Business Economics”, “Finance”, “Accounting”, “Marketing” and “Translation”. Academy of Management Business and Law is listed in the state register of educational establishments of Ukraine.

1995 , June – the first of specialists Degrees “expert” on the basis of higher education.

1996, November – signed agreement between DAMBL and the State Commission on Securities and Stock Market of Ukraine on cooperation in the field of retraining.

1997 , January – signed an agreement on cooperation and partnership between the National Academy of Internal Affairs of Ukraine and DAMBL.

1997 October – The Academy is accredited by the second level of accreditation.

1997 , October – the first set of students majoring in “Jurisprudence” On all the branch at DAMBL.

1997 , November – the first time in the region began training Master of Business Administration (MBA) at the Graduate School of Business DAMBL.

1998 – DAMBL opened a branch in the city of Kremenchug, Poltava region.

1998 July – The Academy is accredited by the third level of accreditation.

2001 , June – the President of Ukraine and Poland in the opening at the Ukrainian-Polish DAMBL Support Center for Management Development, entrepreneurship and investment.

2001 , December – Academy of Management Business and Law renamed the Dnipropetrovsk University of Economics and Law.

2002 , June – Specialized academic council for defense of theses for the degree of candidate of economic sciences.

2002 , June – the first issue of qualification of specialists in the “master”.

2003 , May – open Memorial Hall of Nobel Prize in Economics.

2003 , May – the decision of the National Council of Ukraine on Television and Radio Broadcasting of creating TRC “Commonwealth” in Dnipropetrovsk University of Economics and Law.

2003 , October – The University entered into the State Register of scientific institutions, which receive state support.

2004 , September – Resolution of the Presidium of the Higher Attestation Commission of the creation of specialized scientific council for the protection of the thesis for the degree of candidate of economic sciences.

2005 , May – The University is accredited by the MES of Ukraine IV (highest) level.

2005 , November – launch of Economics at the Bologna principles.

2009 , May – The University has once again been accredited by the MES of Ukraine IV (highest) level.

2009 , May – Meeting business circles of Ukraine and Poland, “The current state of Ukrainian-Polish cooperation. Common Path: potential assessment of prospects “by the President of Ukraine Leonid Kuchma (1994-2005) and President Kwasniewski of Poland (1995-2005).

2009 , June – Parliamentary hearing on-line “strategy of innovative development of Ukraine for 2010 – 2020 under the conditions of globalization challenges’ participation in the discussion of direct inclusion B.I.Holoda, Rector of Economics professor, who was with the relay rooms plenary sessions Verkhovna Rada of Ukraine.

2009 , September – 2010 , May – on the initiative of Dnipropetrovsk University of Economics and Law held World Nobel Students’ Internet Contest in economics.

2009 , October – on the initiative of the University opened a joint project with the City Council “University of the Third Age,” which begin teaching more than 400 students of the retirement age.

2010 , February – University started preparations for the introduction of English-language training program for the field of “International Economics”. Initiate procedures to validate Bachelor of International Management in conjunction with the Welsh university.

2010 , May – according to the annual ranking of Ukrainian universities “Compass”, the University ranked first among superpower private schools for quality training of economists and the second – the quality of training of lawyers.

2010 , May – the Second International Nobel Economic Forum «The World Economy of the XXI Century: Cycles and Crises.”

2010 , June – based on statistics in comparison with our competitors by the decision of the International Economic Rating “League of the Best” Dnipropetrovsk University of Economics and Law received national certificate “COMPANY OF THE YEAR 2010”

2010 , October – Dnipropetrovsk University of Economics and Law named in the honor of Alfred Nobel

2010 , October – University received a Certificate of European Business Association “European quality” in compliance with European standards in the field of education.

2010 , November – Welsh university completed the process of validation of the program Bachelor of International Management in Dnipropetrovsk University of Economics and Law of Alfred Nobel.

2010 , November – at the “Education and Science”, held in Kiev, the University received the Gold Medal in the “development of logistics.”

2011 , May – Second Virtual Session of the International Nobel Economic Forum

2011 , December – University became a member of the European Council for Business Education (ESVE) and entered into a process of international accreditation of business programs

2012 , May – rated schools of Ukraine “Compass 2011” compiled by the feedback of employers and graduates, Dnepropetrovsk Alfred Nobel University ranked 12th among schools that are trained economists (the first non-state) yielding only 11 national universities ( with more than 100 in Ukraine), and 15th among universities who are trained lawyers

2012 , May – the Third World Congress of the Nobel Economics “World Economy of the XXI Century: Cycles and Crises”

2013 , October – the decision of the tender committee Ukrainian contest of production quality (goods and services) “100 best goods of Ukraine” University declared the winner.

The hostel buildings are of a modern block type and consist of the rooms for 2-3 students with all the necessary conveniences. All rooms are well-organized and furnished with a bed, a desk and a chair, provided with cold and hot running water, central heating, Internet access and suitable lighting for both study and relaxation. The territory of the hostels is protected and patrolled by officers of guard service. In the hostel each room is attached to the kitchen suitable for students to cook food on their own taste. Students will need to supply their kitchen utensils.

Meals and provisions may be bought from various shops and supermarkets around. There are also several students’ canteens and cafes on the territory of the academy.

Living in a hostel you’ll combine the convenience of living near academic buildings, the access to programs and services which help you develop academically, the opportunity to build lasting friendship relations, and comfortable, affordable living.

Off-campus accommodation can be obtained in the nearby apartments. Available apartments and houses are furnished and vary in size, number of conveniences and cost.