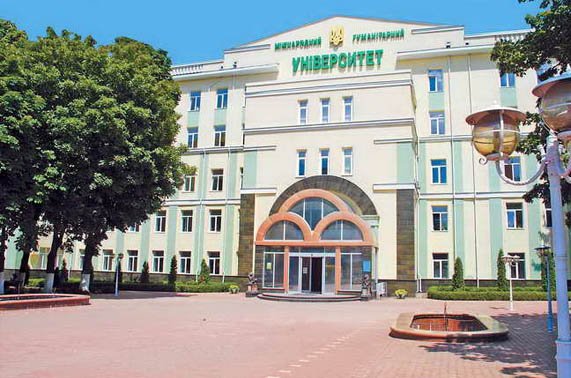 We work for the present and future of Ukraine. Our motto  is “Pro bono publico”.
The community of International University recognizes its mission to promote the ideals and values of civil society, openness, dialogue and cooperation via the humanities outlook and thinking of the workers of all the branches of expertise, democratization of education, bringing of education to every person on the basis of  individual liberty . We aim at the permanent improvement of our activities, and being in constant creative search, we boldly design our prosperous future.

The road to it is the development and improvement of researches, introduction of educational innovations, informatization and promotion of educational process, involving the leading scientists and practitioners, with the constant growth of expertise of our team.

We aim to be a powerful, constantly developing European university, capable to educate up to the world standards and provide our graduates with necessary practice.

“Alpha and Omega” of our dream is to foster a spirit of patriotism among all employees, establish such team atmosphere that would create the image of our university as «Alma Mater» for every student.

Our credo: train professionals – leaders in their fields.

We aspire:
– To develop a creative potential of our students that they could meet a real challenge of professional problems in the changing, highly competitive world of the 21st century to attain personal success and provide financial independence;
– To create the interactive academic environment, having democratic and egalitarian relationships between teachers and students, with mutual trust, goodwill and support;
– To involve students in scientific research, –  including  first-year students;
– To learn actively several foreign languages and improve language skills with training abroad;
– To mould students into high standards of law, respect for law and human rights protection on the basis of students’ self-government and their active participation in the life of the university, city and country;
– To prepare students for an actual career, teach them management principles and art of human communication by virtue of  professional competence, respect for social needs and social responsibility;
– To develop expert use of computer hardware and information technologies on the best world standards.

Ever since the very first universities emerged, a university has always been a community of people whose common aspiration is receiving new knowledge. University principles and values have always been natural for me, they are initially set, as though existing a priori.
Before I got employed at this University, I had a clear idea that the cornerstone of policy of a new educational institution should be academic freedoms, emphasis on scientific work and high qualification of the faculty.
Brought up in the spirit of classical academic traditions, I could not even imagine that the destiny will give me a happy opportunity to work at the university of a new type. A new type of university is that which independently chooses the ways for its development, relying only on its own resources – in a word, being independent, – though receiving no financing from the government.
Creating a university in 2002 when most of non-state higher education institutions were already celebrating their tenth anniversary of stay in the educational market needed considerable courage and audacity of our founders. To be competitive in the educational market, a new university had to be special.
When I was invited to work at the University, I knew that the author and the initiator of this project and its inspirer is Sergey Vasilyevich Kivalov — the President of the Odessa National Academy of Law, Deputy of the Verkhovna Rada of Ukraine.
By the time the University was established Sergey Vasilyevich Kivalov had already created the most modern educational and scientific complex of the Odessa National Academy of Law, located at the 4th Station of the Bolshoy Fountain. And now – a new fulfillment.
On December 2, 2002 inauguration of the new University took place. The day was frosty with sharp blasts of wind and a heavy snowfall, but the festive mood reigned in the International Humanitarian University. Well-known scientists, educators and public figures from Ukraine and Russia were among the honourable visitors who attended the event. Sergey Vasilyevich Kivalov opened the ceremony and cut the traditional ribbon.
Sergey Vasilyevich Kivalov invited me to a position of the First Vice Rector. Ilya Ivanovich Karakash, a high professional and a wonderful personality, was appointed Rector.
It was due to his expertise that we had no problems with drawing up of great variety of official documents. Ilya Ivanovich Karakash simply took a pen and a sheet of paper… and in some hours put an irreproachable and unobjectionable legal document on the table.
One of the first tasks our small collective staff had to fulfill was creation of the University coat of arms. Our approach was professional: having consulted with heraldry experts we invited an artist, a designer, got a blessing from the University President. Since then numerous University documents bear this coat of arms. As to me, this coat of arms evokes both pride and pleasant feelings by its perfect esthetics.
And then everyday life began – it was necessary to make up the documents for licensing various specialties and to apply before the Ministry of Higher Education of Ukraine.
Licensing a specialty is a difficult task for any higher education institution, to say nothing of a non-governmental educational institution who was usually mistrusted at first sight almost in all official levels.
The first licensed specialty was that of “International Economic Relations”, followed by “Management of the Organizations” and “Management of Foreign Economic Activities”. Then came “Jurisprudence” and “Philology (translation)”. I remember, how thoroughly the curricula prepared by us were discussed in the Ministry, literally each program was exposed to the most detailed examination. Finally, in most cases we managed to convince the opponents. Gradually we gained experience and no more appear like beginners. And the attitude towards us improved too because we scrupulously fulfilled all the requirements of the Law as to education and state standards, which is always appreciated in the professional environment.
Gradually our business partners began to realize that the International Humanitarian University is committed to perfect work.
On April 13, 2005, the University moved to a new building at the 5th Station of the Bolshoy Fountain. The surrounding neighborhood changed for the better. The initial building allotted to the University was reconstructed: two more storeys have been added, all the rooms, facilities and staircase got repaired, the first storey was decorated with marble. The extensive yard was turned into a wonderful park.
In 2009 Sergey Vasilyevich Kivalov set the task of accrediting the University as a whole. Probably, the academic year of 2010–2011 was the most intensive and challenging for our staff. The visiting ministerial commission of six people expressed no criticism. And then came the victory on March 30, 2010 at the next meeting of the State Accrediting Commission the University was accredited as a higher education institution of the fourth, highest level! And we were only 8 years old then…
Many more events took place, but it is already another story… I have told you only about how everything began, as everything was for the first time. Other people will describe new facts in the University history. These people have already come, I have seen them in action. They are Rector Anatoly Fyodorovich Kryzhanovsky, and the Vice Rector for Research Work and International Relations Vasily Dmitriyevich Bernaz, professionals of the highest level, Doctors in Law, professors. Honored Workers of Science and Technologies of Ukraine, Corresponding Members of the Academy of Legal Sciences, they are to be mentioned first and foremost.
But those events which started the formation of the University will remain in its history forever as well as those people who laid its basis, who created and boosted the University and made it into a prestigious higher education institution, professing high moral and ethical values.