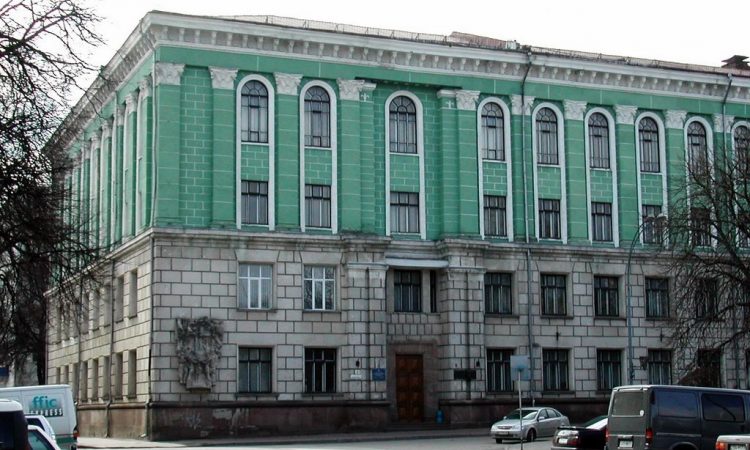 Ternopil State Medical Institute was inaugurated on September 1, 1957 by the resolution of the Ukrainian government of April 12, 1957. In the city that had been almost completely destroyed during the World War II and just began raising from the ruins, it was the first higher educational establishment. Three days after the government resolution, the appointed Director (Rector) of the Medical Institute, Candidate of Medical Sciences, surgeon P.O. Ogiy (later on M.D., Professor) and prof. Martynyuk A.H., the vice-rector, arrived to Ternopil. By the decision of the Regional Council, two educational buildings and two hostels were allotted to the Institute. The clinical base  was provided by the City Hospital that had been functioning then as the Regional Hospital. Morphological building, Regional Hospital and a new hostel were under construction. 19 departments began functioning at the Institute, 66 teachers were working there (including 1 M.D., and 17 Candidates of Med. Sc.).

Standing at the starting line were young teachers-scientists, later on professors, honoured scientists K.V.Kovanov, Yu.T.Komorovsky, A.I. Lokay, I.O.Sytnyk, M.P.Skakun. Among the founders was Ye.H. Honcharuk, an assistant teacher of General Hygiene Department, later on Academician of the National Academy of Sciences, the Academy of Medical Sciences of Ukraine and many foreign academies, Rector of the Kyiv National Medical University named after O.O.Bohomolets.

Even under the communist regime, there were displays of unconventional thinking, courage of mind and ability to arouse moral consciousness.   V.S. Lisovy, the philosophy teacher, who was working at the institute in 1962-1966, is remembered by the students  of the 1960s owing  to his lectures and original institute wallpapers which he edited. Arrested for the “anti-soviet activity”, he served 11 years in jail and concentration camps. In 1998, he came to meet the rector, teachers and students of the Medical Academy and delivered lecture on philosophy to the second-year students. At present, V. Lisovy, the Candidate of Philosophy is the Head of the History Department at the Philosophy Institute of the National Academy of Sciences of Ukraine and Professor at the Kyiv-Mohyla Academy. It is worth mentioning that such graduates as Heorgy Petruk-Popyk, Stepan Babiy, Hanna Kostiv-Huska made their literary debut as students and became famous poets. The development of the Institute is inseparably  connected with the names of its rectors Assistant Professor I.I. Hetman (1972-1981), Prof. I.S. Smiyan (1881-1997); the vice-rectors, professors O.A. Yarosh, O.N. Lulka, I.V. Shust, I.O. Sytnyk, V.H. Koveshnikov (the former Rector of the Luhansk Medical University). With Ukraine attaining independence, new opportunities and impulses for the institute development, in particular the chance of entering into market relations and joining the European educational community, have become available. Here are some landmarks.

On July 1, 1992 by the decision of the Cabinet of Ministers the Institute was named after I.Y.Horbachevsky, a famous scientist, member of the T.G.Shevchenko Scientific Society and All-Ukrainian Academy of Sciences, born in the Ternopil region. In 1994 the institute obtained the highest IV accreditation degree and was granted a licence for training  400 students at the Medical Faculty. In 1995, the Faculty of Nursing in the specialties “Nursing” (training nurses andnurses with a bachelor’s degree) and “Laboratory Diagnosis” (training laboratory assistants with a bachelor’s degree) as well as the educational  Medical Institute-Lyceum complex (the former Halytsky College) were founded. As compared to 82 faculty  students in 1995, the number grew to 450 in 1997.  On January 30, 1997 by the decision of the Cabinet of Ministers of Ukraine the institute was awarded the status of Academy. In April 1997 the I.Ya. Horbachevsky Ternopil State Medical Academy celebrated its 40th  anniversary. Professor I.S.Smiyan, the Honorary Worker of Higher School  and the Coresponding Member of the Academy of Medical Sciences of Ukraine,  was the rector for 16 years. In 2003 the rector prof. L.Y.Kovalchuk was elected a Coresponding Member of the Academy of Medical Sciences of Ukraine. Professor M.P.Skakun was a  Honorary Worker of Higher School too. Professors L.Ya. Kovalchyk, M.A. Andreychyn, Ya.I. Fedonyuk, O.O.Markova, M.I. Shved, S.V. Khmil, S.I. Smiyan, S.N. Vadzyuk, S.I. Shkrobot and V.V. Bihunyak  are Honorary Workers of Science and Technology of Ukraine. Professor O.M. Yedynak and associate professor V.V. Demyanenko were awarded the title of Honorary Inventor of Ukraine.

Since 1997, the Specialized Council for defending theses in Surgery, Normal Anatomy (medical and biological sciences) and Pathologic Physiology has been functioning (M.D., Professor L.Ya. Kovalchuk is the Head of the Council).  In 2004, the Specialized Council for defending theses in Paediatrics, Obstetrics and Gynaecology was established. In August 1997, the Honorary Worker of Science and Technology of Ukraine, M.D., Professor L.Ya. Kovalchuk headed the Academy. The rector’s credo is: “We must establish the educational institution of high European standard”.

In 1999 the Academy confirmed the highest (IVth) degree of accreditation. In 2000 the newly organized Pharmaceutical Faculty began training pharmacists and from 2001 – clinical  pharmacists and pharmacists-cosmetologists. In 2000, the Academy received the license providing obstetricians, doctor’s assistants and nurses-laboratory assistants to be trained. The Nurses Training Faculty was reorganized into the Faculty of Bachelors of Junior Medical Personnel and in 2003 – into the Medical College.

Since 1997 foreign citizens have been studying as students and clinical interns. At that time the Preparatory Courses were organized for them. There were formed departments of Hospital Therapy No.2, Medical Informatics with the Course of Physics and Special Equipment, Emergency Medicine, Ambulatory Care, Diagnostics and Medical Informatics of the Postgraduate Training Faculty (on the basis of the Rivne Regional Hospital), Pharmacognosy with Biology and Medical Genetics, Physiotherapy, Medical Rehabilitation and Balneology, Obstetrics and Gynaecology No.2, Chemical and Pharmaceutical Subjects.

Complex restructuring of all the trends of activity was under way. The educational process was aimed at meeting world qualification standards. The subject of Osteoporosis was the number one priority of the scientific activity with the half of the departments involved. Inventive activity was in progress, scientific developments being regularly introduced in practical health care. In particular, the lyophilized pig xenodermotransplants, developed by prof. V.V.Bihunyak, are widely used for the treatment of burns in all national burns centres. The goal of improving medical and prophylactic activity was attained through the establishment of consultative and treatment centre.

Spirit of the new time called forth positive changes in upbringing, national and patriotic activity, as well as in the spiritual life of the Academy. The system of tutors and students’ self-governing was regulated. The brass band and choir, dancing group, ensemble of folk instruments and sports sections were popular then. The students participated actively in the Club of Talented Youth, amateur theatre and discussing club. The Academy had its own picture-gallery. A new generation of poets was growing among the teachers and students. Poetic anthologies by Lesia Romanchuk (a member of the Ukrainian Society of Writers), Valeriy Didukh, Roman Ladyka were published.

More than 800 international students from 48 different countries are studying in I. Horbachevsky Ternopil National Medical University.

The system of education in I. Horbachevsky Ternopil National Medical University is according to European Credit Test System (ECTS).

The institutes are departments of I. Horbachevsky Ternopil National Medical University are located in 12 educational buildings and 17 clinics and hospitals in Ternopil. The educational process is provided with the following academic staff:

After graduation students are eligible to take the National Council License Examination (NCLEX) and Commission on Graduates of Foreign Nursing Schools (CGFNS) for registered nurses to start working and living in USA. After obtaining associate degree, students can transfer to USA for bachelor degree.

Foreign Students live in the hostel; most of them come from India, Malaysia, Syria, Pakistan, Nigeria, Ghana, Poland and other countries.

There are 508 bed places in the hostel. The hostel includes 206 rooms. Every floor has two wings each including 3 accommodation blocks, a side room, a kitchen and a home room.

Most rooms of the hostel are connected to the Internet.

There are a hostel warden’s office, hostel staff office, spacious lobby and 2 libraries.

There is a first aid unit on the ground floor of the university hostel.