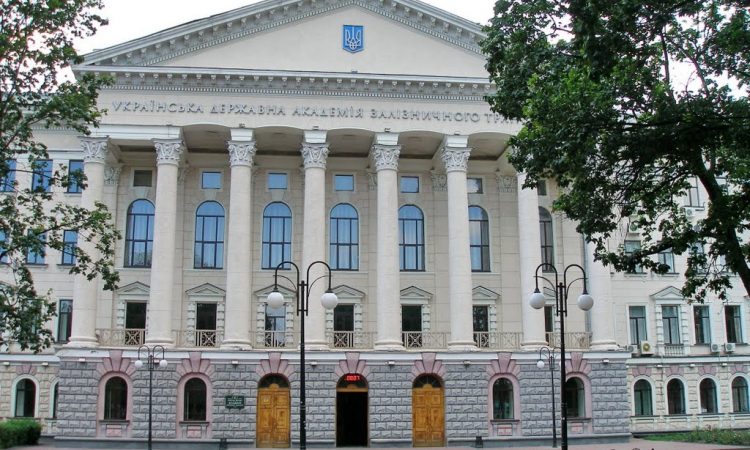 Ukrainian State Academy of Railway Transport was founded in 1930.

Ukrainian State Academy of Railway Transport today holds a leading position in the field of railway transport specialist training not only in Ukraine but also among related institutions of higher education of the Commonwealth.

History of the Academy originates June 12, 1930 , when according to the decree of the Council of People’s Commissars of the USSR N 19/ 672 was established Kharkiv operational and traction Institute of Railway Engineers. The new Institute started classes 432 students. In 1930, Beginnings own activity and postgraduate studies.

In 1932 the school was renamed to Kharkiv Mechanical maintenance and University of Transportation , and in autumn 1933 words ” operational and mechanical ” disappeared from its name. It was then and is still a common abbreviation HIIT – Kharkov Institute of Railway Engineers.

In 1993, HIIT has been accredited by the State Accreditation Committee of the Ministry of Education and Science of Ukraine in full at the IV level of accreditation with the change in status. The Institute was renamed the Kharkiv State Academy of Railway Transport – to the provision of corresponding rights with respect to autonomy. According to the Ministry of Transport and Communications of Ukraine from 28.05.2001 N 346 , the Academy is called – Ukrainian State Academy of Railway Transport. April 8, 2003 decision of the SAC MON Ukraine Academy was re accredited by IV level.

Since the mid 80’s of the twentieth century academy, at that time the status of the Institute of Transportation , was in the top three with such institutions as the Moscow and Leningrad (St. Petersburg ) State University of Transportation . HIIT repeatedly awarded the challenge Red Banner and was a basic institution HUNZ MPS for the new organization, the technical and the aesthetic of the educational process . Today academy is a major educational institution, training ground for the introduction of new technologies in the learning process.

For 75richnu its history UkrDAZT prepared nearly 60 thousand specialists for rail transport, road construction and other industries. Among the graduates of the academy – ministers, deputy ministers of railways chiefs , heads of Railways and large enterprises , famous scientists and statesmen. Here are the names of some of them:

Hero of Ukraine , Academician of the Transport Academy of Ukraine , GM Kirpa – Minister of Transport and Communications of Ukraine , Director General of Railways (2000-2004) – an honorary citizen of the city of Kharkov;

Hero of Ukraine , Academician of the Transport Academy of Ukraine V. Ostapchuk – Head of the Southern Railway ;

Hero of Socialist Labor BE Shcherbina – Minister of Construction enterprises of the oil and gas industry of the USSR , and since 1984 – Deputy Chairman of the Council of Ministers SRSOR , Chairman of the Government Commission in the aftermath of the Chernobyl disaster;

Hero of Socialist Labour , PhD , Professor , MS Konareva – Head of the Southern Railway in the 1982-1991 biennium – Minister of Communications of the USSR , an honorary citizen of the city of Kharkiv.

More than 130 graduates of the Academy have become doctors.

Today UkrDAZT – a modern university of IV level of accreditation with an international reputation in the field of education and research. The Academy has trained more than 11,500 students , including foreign, who receive a specialist ‘s degree, master’s degree. The Academy has 35 departments , including 18 producing , full-time and distance learning trains specialists in 15 directions and 19 specialties. The structure also includes UkrDAZT Donetsk Institute of Railway Transport Institute and retraining and skills upgrading.

The educational process is carried out highly skilled staff of scientific and pedagogical staff, professors, assistant professors and lecturers, which the academy is 529 people. Among them – the winners of the State Prize of 5 , 27 academicians and corresponding members of the branch academies of Ukraine and foreign countries , more than 50 honorary railwaymen and transport workers deserved 8 .

Ukrainian State Academy of Railway Transport is a leading higher educational institution in the transport industry , real cradle frame for Ukrainian railways and other enterprises in Ukraine.